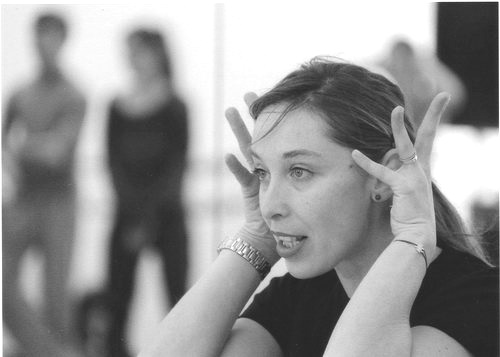 Macha Daudel was born in Avignon, France, where she studied ballet at the Conservatoire de danse d‘ Avignon. She started her career at the Ballet National de Nancy, directed by Pierre Lacotte; afterwards she joined the Ballet du Capitole de Toulouse directed by Nanette Glushak as a soloist. The year 1997 was very important for Macha Daudel. She moved to another country and left the company, where she stayed as soloist for more than 10 years.  She began working at Aterballetto in Reggio Emilia in Italy, under artistic direction of choreographer Mauro Bigonzetti. At Aterballetto Macha worked with many famous choreographers including Jiří Kylian, William Forsythe, Ohad Naharin, Iztik Galili, Fabrizio Monteverde, Jacopo Godani, and Eugenio Scigliano. Artistic director and choreographer Mauro Bigonzetti created for Macha Daudel several roles, which she performed with the company all over the world. From 2007 she started teaching ballet and received her Diplome d’état de professeur de Danse Classique in 2009. She became a very popular ballet teacher and at this time teaches in several schools in Europe. As assistant to choreographer Mauro Bigonzetti Macha Daudel is constantly on the move to rehearse and set his works in many theaters in the world.